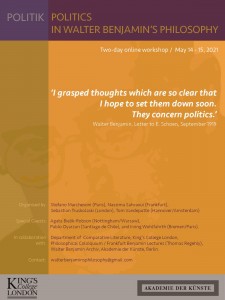 ‘I grasped thoughts which are so clear that I hope to set them down soon. They concern politics.’
Walter Benjamin, Letter to Schoen, September 1919

Like many of his other endeavours, Walter Benjamin’s reflections on the concept of politics have a fragmentary character. In the late 1910s and early 1920s, he worked intensively on a project that he came to refer to simply as his Politics; but even though this study appears to have been largely completed, most of the resulting texts have been lost or survived only in the form of outlines, notes, drafts, and fragments. Despite this fragmentariness, the traces of this project contain numerous clues as to the central themes and problems at the heart of Benjamin’s political thought. These range from his critique of law and notes on the “category of justice” to a theory of “ethical anarchism”; and from his reflections on the nexus of politics and world history to a new conception of the human being qua political being. All of this, finally, marks Benjamin’s investment in political practice.

This two-day virtual workshop focusses on the fragments and studies written in the orbit of Benjamin’s seminal essay “Towards the Critique of Violence,” stemming mainly from the period between 1918 and 1921. The workshop will be organised around collective readings and discussions of selected text passages, each introduced by a brief presentation. The constellation of problems and concepts presented in these texts will serve as a starting point for a broader exploration of Benjamin’s political thought: we will ask what it means to read these texts today – and how we might understand their actuality.

For this workshop we will be joined by AGATA BIELIK-ROBSON (Nottingham), PABLO OYARZÚN ROBLES (Santiago de Chile) and IRVING WOHLFARTH (Paris/Bremen).

Since the event revolves around reading sessions, some prior knowledge of Benjamin’s philosophical writings is strongly encouraged. Bilingual, German-English copies of the texts will be made available. To facilitate the discussion, the number of participants for this workshop is limited.

If you are interested to participate, please send a message and a brief biographical note to the organisers before 31 March, 2021.