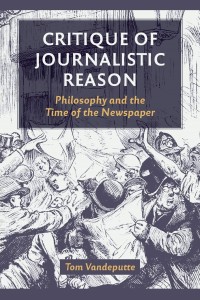 “The subject of this book,” Benjamin writes in the last exposé of his Arcades Project, “is an illusion expressed by Schopenhauer in the following formula: for the one who wants to seize the essence of history, it suffices to compare Herodotus and the morning newspaper.” This sentence points to a preoccupation running through Benjamin’s work: the attempt to develop a philosophical interpretation of journalism as well as the experience of time and history exemplified by it. In this book, Benjamin’s preoccupation with “the journalistic” is examined alongside that of two other thinkers writing in the aftermath of German Idealism and its philosophies of history: Kierkegaard and Nietzsche. Tracing the images of images of reporters and newspaper readers, messengers and town criers, announcements and rumors punctuating the writings of these thinkers, Vandeputte shows that the critical engagement with journalism plays a pivotal role in their philosophical project, in particular their theories of time, history and language. Through a close reading of Benjamin’s 1931 essay on Karl Kraus – the Viennese writer who, for him, embodied journalism “most paradoxical form” – as well as the earlier reflections on the form of the journal (Zeitschrift), Vandeputte examines how Benjamin’s critique of journalism is interwoven with an attempt to articulate a singular relation between thought and its own time: one that strives for an “actuality” (Aktualität) conceived as a counterpart to the novelty of the newspaper.

This is a fascinating and provocative book, powerfully argued, exegetically adroit, and profoundly suggestive in its implications. Vandeputte offers a series of extraordinarily fine-grained, original, and subtle readings that brilliantly demonstrate how philosophy’s ambivalence about journalism expresses philosophy’s own uneasy relation toward its temporal and historical constitution. It makes us think anew about the ‘new’ and the ‘news’ and about ‘thinking’ itself.
–Rebecca Comay, University of Toronto