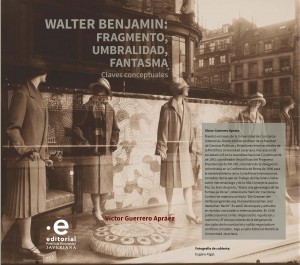 The book approaches three conceptual tools developed by Benjamin across his work which allowed him to sustain his emancipatory intellectual project and had a powerful influence on contemporary thinkers. The fragment is a tactical concept that seeks to avoid the trap of illusory totalization taken from the early german romanticism and employed in “Kapitalismus als Religion” –whose content is critically related to the insights made by Deleuze in his first published text “Christ and the Bourgeoisie”- that counterpoints Carl Schmitt’s interpretation of “Political Romanticism”, as the beginning of a long and contentious theoretical confrontation whose main stages are examined: the failure of his doctoral thesis is interpreted from the implications of his fragmentary and messianic thinking to analyze the deep differences which opposed radically Benjamin to the Weimar academic system. The threshold as historical and topological notion present since his dissertation and refined through the years made it possible logically and ontologically to consider the indecibility between exception and normality, culture and barbarism. The ghost is a hermeneutical category whose importance grew gradually until it became crucial for the analysis of the capitalistic society and the understanding of modernity as a new type of coalescence between materiality and spectrality. Illusionary phantasmagoria and corporeal bodies, as one of the crucial axes in the “Arcades Projekt”, not entirely developed by Benjamin, given the irruption of the Nazi deadly specters, to explore the way for a renewed understanding of the most famous ghost´s tales in the XIX century, “The Turn of the Screw” by Henry James, to which he made one his most favorable comments.